The Battle of Sefton Park.


We choose a colour and paint our faces


In the wide open and council tax places.

Squirrels collect all the empty shells


Then ants march off to fill with munitions


We’re the target for the doves of Dresden.

We take cover in the smoking bandstand

They won’t share their fags, and call us losers

The weather vein’s arrow swings and points at me

It says W-E, but I don’t feel included.

We have swords of twigs on the pirate ship


Until a protest of ducks calls us to Pan


And outside that palace of palms and glass


We surrendered arms to the Valentine ghost and ran.

Then the stars looked dim, like energy saving bulbs


As we lay milk bottle daisies on statue steps


We’ll live to fight another day I guess


If mum will let us out to play tomorrow.

I had the great fortune of selling a flash fiction piece to those good and patient people over at EDF at the start of this year. Every Day Fiction promises to post a new story every day into your email in-box to give your morning, or lunch break, an extra bit of much needed magic.

So if it's raining outside or your desk is full

or unfinished reports just subscribe to EDF and have the internet carrier pigeon drop a little surprise. Oh wait that sounds like a bad thing.

Forget my ramblings and take a peek over there and see if you like it. It's a free and friendly service brought to you by some very creative and helpful people.

My story was the first to be published on 1st January 2010 so I read it with a fuzzy head and bleary eyes. Here's your chance to read it sober. Though you may need a drink after you finish!

Here's my story at EDF if you have four or five minutes to spare.

I've been mulling over the prospect of entering this year's Script Frenzy. This idea is the culmination of becoming bored with the process of novel writing and wishing to do something more visual. First let me explain the concept of Script Frenzy for those, like myself, who have only stumbled upon it this year.

Script Frenzy is like the screenplay version of NaNoWriMo. But instead of writing 50,000 words of a novel in 30 days you are urged to write a 100 page script in the same time fame. I did attempt NaNo last year and failed miserably because I found so many other writing projects, along with that dastardly thing called life, kept getting in the way.

So somebody suggested Script Frenzy coming up in April (starts April 1st). Okay I thought, it would give me a break from novel writing, take me down a more visual route and even if I fail I would have tipped my toes in a different format. And as we know experience of all genres and types of writing can only be a good thing. Can't it?

So I signed up to Scripped which is an online screen-writing software site. This is handy as you can access your screenplay from any computer without worrying if you have the correct software to continue  if inspiration strikes. It seems writing a screenplay is a little more complex than other story formats which can be scribbled out on beer mats or the back of your hand if you've left your Moleskine in the hotel room or your Word installed computer at home.

Scripped is not only ingenous but very simple to use. I was using the basic free version (you can pay $4.95 a month for the bells and whistles version. Which is something I am already considering) and had knocked out 7 pages of script in a couple of hours. 'Well,' I thought. 'This screen writing business is a whiz.' 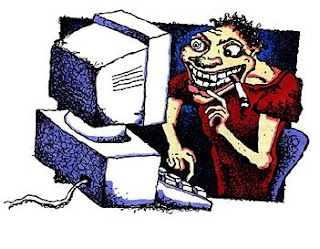 I exported the screenplay to PDF through Adobe and printed off a very professional looking piece of work. Okay it was rusty, had too many characters, too much action and not enough dialogue but it was a start. I felt so inspired I have decided to sign up for Script Frenzy and give a  very good go. I must admit that I doubt whether I can complete the task with the same problems of NaNo hanging over me, but I've not felt so excited about writing in such a long time.

Will this eliviate my boredem of the novel writing process? Well let me tell you that it already has. After reading the first seven pages of my experimental script I realised that my notes were mainly to do with prose I could use and plot and story arcs I could shape. So in a way this script is already developing into a blueprint of a novel which I can visualise much more clearly through the screenwriting process.

I doubt whether you'll see my name nominated  for the Best Original Screenplay Oscar but it could at least put it on the spine of a book in Waterstones someday.

Well back to the storyboard I go and I'll keep you updated on how my adventures in screen writing PAN OUT: