Thanks again to all who have voted and taken the time to read the story. Your support is much appreciated.

Hi, I'd like to ask if everybody could spare just a couple of minutes of their time to vote for one of my short stories.

My ghostly tale, 'What Doesn't Kill You' that was published on Spook City last year has been nominated for 'Best Horror Short Story of 2010' at Critters.org.


It's up against a lot of other strong candidates so I need all the votes I can find to try and push my story higher up the list.

Simply follow the link below and look for the story title or my name on the list of candidates and vote if you could. You will need to verify the vote from your email in-box and that's it.

Thanks for reading and thanks for giving your time to vote. 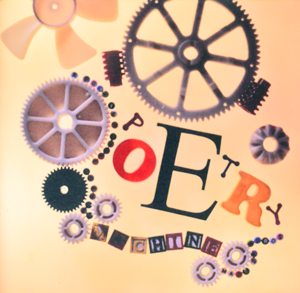 Yes I never thought I'd ever write those words either. But after several rewrites at the request of the editors on Every Day Poets I finally had a poem accepted. Not sure on the publishing date yet but will put the link up here once I know.

The piece is entitled, 'The Machine That Makes You Dream'.

I've only started writing poetry that I felt confident enough to display for the past year and never thought it would break out of my notebook and blog.


I wrote the poems for my own enjoyment but recently I've found the courage and encouragement to dip my toes in the rippling waters of the poetry world.


I'm really happy at this first small step and hope you enjoy it too when it becomes available.
at January 10, 2011 12 comments:
Email ThisBlogThis!Share to TwitterShare to FacebookShare to Pinterest

What Doesn’t Kill You

The child was at the foot of his bed again. Every night since Sadie finally left him she appeared. The first couple of nights he hid under the duvet and waited for the sun to bleach out the vision. By the fourth day he was sent home from work for sleeping at his desk. His life was crumbling around him and the last thing he needed was this kid, this thing coming to haunt him each night.
He finally plucked up the courage to speak to it. But when he opened his mouth the thing disappeared. Outside all the streetlights blew and every car alarm screeched into action. He ran to the bathroom and threw up. He had to sort this out.
He stepped into the church like a naughty child that had been caught stealing, or more accurately bullying. The priest was no use. Told him he should consider getting help to stay sober.
‘This ghost you see is only in your head.’ The priest told him.
‘What about the Holy bloody Spirit?’ He shouted back. ‘Is he in your head?’
Father Roland grabbed him by his dirty shirt collar and pulled him hard against his chest.
‘Look man whatever you are seeing is a result if that stink on your breath and something you’re keeping inside. The only ghosts in this world are the ones we create.’
‘But she’s real, as real as you are right now.’ He began sobbing. Father Roland had to stop him from crumbling to the floor.
‘You have a cancer eating you up. Once you deal with that you deal with this spirit. Understand?’
He loosened his grip and let him fall onto the pews. When he looked up she was there. The little girl, six years old, dressed all in black with tight pigtails and a blank expression on her white face. His screams went unheard. The priest had done an Elvis and left the building.
The girl smiled at him and held out her hand. Against all his natural instincts he took it. The sun burnt through the stained glass windows saturating the church with vivid colours. He saw who she was for the first time, he recognised the eyes. A church is a good a place as any to die he thought. When he woke up he was in heaven.
Only it wasn’t Heaven. He’d mistaken the crisp white rooms and glowing neon lights of the hospital for God’s pad in the sky. She was there at the end of the bed. There was no escaping her, he realised that now.
‘I don’t understand what you want from me. Why can’t you leave me alone?’
The girl smiled and looked at the door. It swung open. It was Sadie, come with flowers and grapes like cliché. He was so relieved to see her beautiful face again.
‘They rang me at work. Oh Steven what has happened to you?’ She couldn’t believe the difference in him after only one week. He looked ten years older, his hair was greying and his eyes seemed hollow. She wanted him to hurt when she left but not like this. 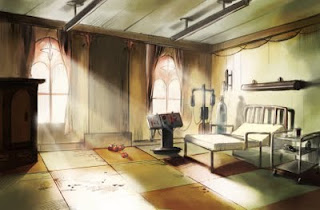 ‘Sadie I saw. I mean there’s this girl…’
‘I knew it. You can’t help yourself can you. You’ll never change.’ She stood to leave but he grabbed her wrist.
‘No a kid. A little girl.’ He tried to sit up but found he couldn’t move. He saw the drip at the side of the bed. Maybe it would have been better if they had left him to die.
Sadie sat down and took his hand from her wrist. She held it and he felt real for the first time in a long time. He explained what had been happening and what the priest had told him about ghosts being a cancer, like guilt. When he finished he looked up and told her who the girl was.
‘Oh Steve no, that’s impossible. Please don’t say that.’
‘Is it true Sadie, please tell me. If you do I promise I’ll leave you alone forever, you’ll never have to see my face again or worry about what I may do to hurt you.’
She began crying. She’d waited to let the tears out for a long time but was too afraid she may never stop once she did.
‘Last month, in this very hospital. Steve I’m so sorry but I knew I couldn’t stay with you. The baby would have given you an excuse to harass me for the rest of my life. I wanted you gone, gone for good and I didn’t want to put a child in that danger.’

The girl was sitting on the chair by the window, the evening light highlighting her features. She looked so much like Sadie, so beautiful and innocent. But it was her eyes that scared him. She had her daddy’s eyes. He wasn’t a murderer but he felt like one at that point. He was so horrible and so violent that a woman he loved and who had once loved him back decided to have an abortion rather than bring his child into this world.
He let go of Sadie’s hand and smiled at the girl. The ghost was a cancer alright and he decided he needed the cure. He’d never hold his daughter now. It was too late for that. It was too late to win Sadie back too but he thought she’d be better off without him anyway. He just hoped he had time enough for himself.
Every now and then he falls behind a little, falls off the wagon too. But he sees her there. Not the same girl but her eyes looking at him through other children. And when he wanders the streets he notices how many children have those eyes.
He sees what others can’t. He sees all the lost children walking amongst us who also have their daddies’ eyes. There’s no cure for that cancer.
Originally published on Spook City
Copyright © 2010 Anthony Cowin.
at January 03, 2011 3 comments:
Email ThisBlogThis!Share to TwitterShare to FacebookShare to Pinterest