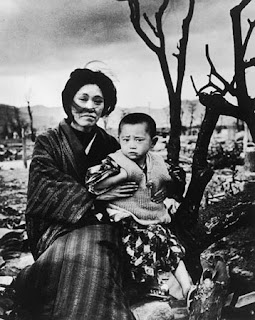 
He remembered the ghosts on the stone doorsteps. The shadows of the dead like permanent graffiti to remind the world. Japanese schoolchildren turned to dust on swing sets. Grandmothers now soil in the rose beds they were tending when the blast came.

He remembered waving at the trains leaving the wastelands the next morning. The commuters ignored him. Later he would hear of the boxcars in Europe rolling toward the camps like mobile coffins. He hated trains.

He rolled up the escalator and shuddered. Herds of people were rushing around the shopping mall in fancy dress. At least they were polite this year.

The boys dressed as Tommys and German soldiers kicking a football around the food court let him pass. The men dressed in NYFD uniforms removed their helmets in respect.
The shops were full of UN peace fighters. The Styrofoam igloo walls dividing the shops were being hacked down by young German students. Journalists carried Croatian children to the first aid kiosk.

A small hand took his. He looked down to see himself, young and smiling, a time before everybody he loved died of radiation cancer.

He walked toward the light department and felt the peace at last.
at January 01, 2011
Email ThisBlogThis!Share to TwitterShare to FacebookShare to Pinterest