The Greats of Wrath 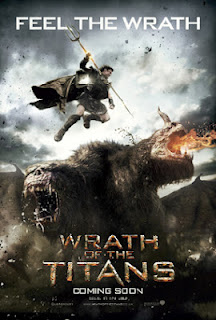 
We've all been there, work life causing stress, middle age break downs, career path petering out after defeating the monstrous Kraken. Wait what? No only gods do this. Still a decade after his top of the office leader board for that epic battle, albeit a very mythos based office, Perseus the demigod son of Zeus is trying to live a quieter life. He's successfully dodging the high flying career ladder and ducking from tabloid stories haranguing him for being a single parent by earning a crust as a village fisherman. He checks the mail every morning for news of child benefit for his 10-year old son Helius, though his mailbox is always empty.

Meanwhile,the same old power struggles between the gods and the Titans keeps the 24 hour God News in business. But humanity is tired of never-ending wars and blanket propaganda. The gods realise they are losing control of the imprisoned Titans and their ferocious leader, Kronos, father of the long-ruling brothers Zeus, Hades and Poseidon. A bit like the Murdoch's then.

The triumvirate had overthrown their powerful father long ago, leaving him to rot in the gloomy abyss of Tartarus, or News International as some demigods call it. It's a dungeon that lies deep within the cavernous underworld, as I said News International! Perseus cannot ignore his true calling when Hades, along with Zeus' godly son, Ares, played by Edgar Ramirez, switch loyalty and make a deal with Kronos to capture Zeus. Think of the unions supporting Ed over David Miliband here.

The Titans' strength increases when Zeus' remaining powers are siphoned and hell is unleashed on earth. Sun on Sunday anybody? Enlisting the help of the warrior Queen Andromeda, played by Rosamund Pike and not Rebekah Brooks, Poseidon's demigod son, Argenor, played by Toby Kebbell, and fallen god Hephaestus, acted with usual cool nonchalance by Bill Nighy, Perseus bravely embarks on a treacherous quest into the underworld to rescue Zeus, overthrow the Titans and save mankind.

Maybe we can draw parallels on our modern world and that of the great legends. Maybe we look too deeply and attach comparison. Either way if history has taught us one thing, it's that history teaches us things. Oh and that mythology can be as enlightening as facts when it comes to deciphering the world we live in. This is a 3D feast for the senses in an often one dimensional world. Plenty of thrills, action and effects that will blow your sandals off the popcorn littered sticky carpet as you will see in the trailer below.

Sometimes a good lie is as good as a twisted reality.