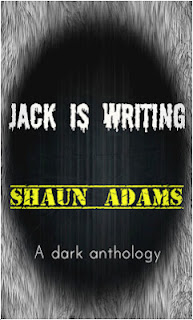 Today I'm really pleased to announce that we have writer Shaun Adams here at The Futurist. I've just finished reading his new anthology of dark tales, 'Jack Is Writing' and have posted my review here. Shaun was kind enough to give up a few minutes to talk to me about 'Jack Is Writing', his influences and plans for the future.

Tony: Hi Shaun thanks for agreeing to answer a few questions for The Futurist.

Shaun: No problem, it’s very kind of you to invite me over.

Tony: I really enjoyed reading your new anthology, ‘Jack is Writing’. I picked up a few constant themes and would like to start off by talking about those.

I mentioned apocalypse and asylum in my review. Are these two themes of Armageddon and insanity something you purposely choose when sitting down to write and if so why?

Shaun: Ouch, straight in at the deep end with this first one. This is a very good question. Most of the stories (excluding the 100 word flashes) in Jack Is Writing began life as prompt based contest entries at a writing website. I do tend to gravitate towards the horror contests so straight away I’m on the left hand path as it were. I don’t believe these two particular themes are set in my mind when I begin writing, at least not consciously.
It’s not as though I sit down and flip a coin, but as you have pointed out there is definitely a pattern emerging.

Tony: There is a mix of dystopia and surreal horror in your writing. These are very dark subjects to tackle. Is this influenced by writers you admire?

Shaun: I would say so, yes most definitely. From an early age, I was reading books by Pierre Boulle, Edgar Rice Burroughs, John Wyndham, H.G Wells and Jules Verne plus a weekly dose of 2000AD comics.
By the time, I left High School in the early 80’s I was reading a mixture of sci-fi, violent western serials and fantasy. George Orwell’s 1984, Stephen King’s The Stand and William F. Nolan and George Clayton Johnson’s Logan’s Run were also milestones.  Here is a dark little secret shared, growing up in a time when nuclear war between the Soviets and the west was still in the back of a lot of people’s minds, I used to imagine stories about surviving such a catastrophe. Some of these got scribbled down in school exercise books, none survive though.

Tony: Well at least we all survived that threat, even if some of your stories didn't. I sense a love of sci-fi creeping into your writing. Is this a genre you would like to explore more in the future?

Shaun: Ah, you got me bang to rights; I’ve always been a fan of the genre.  Mostly the recurring lesson seems to be that there is always a bigger fish, and one day we will find that out. What could be better than horror and monsters in outer space?

Tony: Horrors from inner space maybe? Some people do believe that UFOs don't come from the stars, but below the oceans and being kept secret by world governments. Speaking of which, you mention the Santa Clause conspiracy in ‘Eight Clicks to Eternity’ and have hint at conspiracy site trolls in ‘I never Ordered Pizza’. Are there any conspiracy theories you subscribe to? Come on I won't tell the CIA.

Shaun: Ha, no I’m sorry to disappoint you there.  I love all that stuff though, The Lone gunmen in X files, that guy in Independence Day, “Hello boys, I’m back.” That kind of tinfoil Stetson wearing craziness is very dear to my heart.

Tony: Oh well looks like I won’t be picking up my reward from Washington then. Finally can you tell us when we will may see a Shaun Adams novel. Also what's next for you on the writing front?

Shaun: I’m working on something at the moment that is much longer than anything I’ve attempted before. Whether or not it reaches novel length remains to be seen. I can promise there will be madness and dark imagined creatures aplenty though.

Tony: Thanks for taking the time to visit us at The Futurist today and talk to us Shaun. Good luck with Jack Is Writing.

Or pop over to his excellent blog here- Jack Is Writing.

Jack Is Writing by Shaun Adams
My rating: 4 of 5 stars

This is a strange anthology in many ways. Firstly it mixes genres, then we have short stories rubbing shoulders with 100 word drabbles. That's fine though, I like a bit of variety, especially when mixing sci-fi dystopia with horror. The other element of strangeness is the themes. There seems to be a tug of war between apocalypse and asylum. The best stories by far are the end-of-the-world scenarios and the unhinged protagonist.

Apocalypse being relevant too. Much like Coppola's Apocalyse Now which opened with the Doors brooding track 'The End', Shaun opens this anthology with the end; the end of the world that is. The opening tale, Blind Star, was my favourite and by far the strongest both in style and story. Shaun should really consider expanding this into a novel or at least a novella.

But this anthology isn't just some sort of prayer to J.G Ballard, it's also a reflection of great horror writers such as King, Matheson and early Clive Barker. I don't think the drabbles worked as well as the longer pieces, and I'll be honest my star rating is based only on the longer stories. I'm not saying the 100 word tales are no good as most are. They just didn't seem to belong here amongst stories built on well established characters and solid themes.

One thing I noticed is that Shaun stayed away from conventional horror tropes, whether intentionally or not it proved to be a breath of fresh air. There is a lot of discussion about this choice at the moment, and while I see good and bad in both sides of the argument, it was great to delve into a world vacant of vampires and werewolves for a while.

I look forward to seeing a longer piece of work from Shaun Adams. If it involves madness, space, horror and dark imagined creatures I know it'll be a smash. Because those are Shaun's strengths and he could do worse than exploring those elements of his writing.

Quiet Houses by Simon Kurt Unsworth
My rating: 4 of 5 stars

The framed anthology, or portmanteau, is a difficult device to pull off. I know I'm writing one myself. But as fans of Amicus films will tell you, when it's done right it lives with for a long time.

I think Quiet Houses is more Asylum than Tales That Witness Madness. The stories are connected seamlessly and each feels like it has earned it's place inside the overall arc of the book. I'd even go so far as to say it's closer to the Ealing classic Dead of Night in that respect. Also for the fact it's not really horror, but good old fashioned ghost stories told in a very modern way.

It's easy to see that Simon Kurt Unsworth not only has a great love for the genre, but also for the locations he chooses in these stories. Each setting also becomes a character in every story. It's when comfortably placed in these locations that the author turns the uncomfortable dial to ten and makes us look for the nearest taxi rank. Though knowing Simon Kurt Unsworth the cab would probably be driven by a spectre who would drive us to a very dark place inhabited by memories of death.

My favourite segment is 'The Elms, Morecambe'. Followed closely by '24 Glass House' and 'Stacks Farm'. Though saying that I can't really decide between any that easily.

If you like ghost stories written in an intelligent and beautiful manner. Or if have a love of portmanteau films and like a good scare, then you needn't look further than Quiet Houses by Simon Kurt Unsworth.

A Cold Season by Alison Littlewood
My rating: 4 of 5 stars

This book started slow, but not in a drag to read sort of way, more an easing into the world author Alison Littlewood was creating for us. And what a world. A northern English village cut off from society during a terrible snow storm. With no communication to the outside world and only strangers surrounding protagonist Cass, we already felt boxed in.


Then came the changes. Her son becoming withdrawn and abusive to her after making friends with a local boy. A domineering fellow school mum, a love interest that may not be what he seems. Not to mention the rats and visions.

I did wonder if this would unfold to be an English Rosemary's Baby or more precisely Frank De Felitta's haunting novel, Audrey Rose, thankfully it was neither. It had more in common with The Wicker Man (and A Cold Season movie would adhere to that tradition better than the abysmal Wicker Tree film).

Yet it was none of these things. Alison Littlewood has created something unique in her début novel. She's created a thriller that ramps up with each chapter while still threading a frosty supernatural mystery throughout. It's something a lot of more experienced writers fail to pull off.

The climax is a wonderful ride that scares, tears the heartstrings and makes you sleep with the lights on after reading.

A new mythology and a new voice to keep an eye on in the horror genre. I can't wait to see what she writes next. A Cold Season is a chiller in every respect and one of my favourite novels this year.