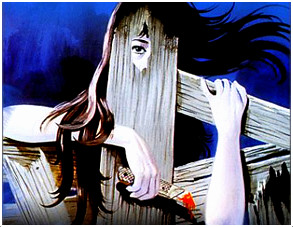 All this sex is killing me.

If you ask people to explain the subtext of horror most would reply the genre is a metaphor for death. Or to be more precise, the preparation of death. I mean it’s obvious isn't it? All that stabbing and hacking. All the falling from roller-coasters and being chased by masked men wielding blood soaked chainsaws.

Wait, let’s stop a minute and pull away for a moment to think about this. Yes murder is obviously about the stalking reaper lurking in our shadows, just as torture is about the stresses and pains of life. But what place does sex have in all of this horror business? Well the French have a nice little euphemism for orgasm, La petite mort, or the little death. Sex and death may not be obvious bedfellows, but they never seem too far apart.

So let me spin the TV in your direction and show you some examples of what I think it all means, or at least why I think it’s there in the first place. You may be surprised, you may be shocked, but I guess you’ll just think I'm as mad as old Leatherface.

"The art of creation is older than the art of killing." Edward Koch

From the very origins of horror cinema the themes have included pursuit and murder of beautiful women. Not to mention recreation. In the 1910 version of ‘Frankenstein’ we first see man as God. The devilish doctor creates life without needing to bother with all that messy sex business. No, he prefers stitching together a jigsaw of stolen cadavers that have been marinating in amniotic fluids. Nice work if you can get it.What about ‘The Island of Lost Souls’, ‘Dr Jekyll and Mr Hyde’, ‘The Mummy’ and the constantly thinning ‘Frankenstein’ franchise? See a pattern emerging? This is about science creating life, or reanimating it at least. But there’s a problem in all of these, they all go horribly wrong. In the pursuit of scientific creation without sex we end with a hell of lot of death. And this is only horror up to the 1930’s!

Okay let’s jump forward a few decades. The 1950s and ‘60s continued the roll out of the tired tropes and dull franchises. We did see the emergence of the creature feature that the paranoia of falling A-bombs produced. Dracula was still hanging around and zombies still did their soft shoe shuffle. But these were remnants of a horror past. Their identities now represented penetration and infection.

Yet something stirred beneath the nuclear paranoia and drug induced Cultural
Revolution. The master himself, Alfred Hitchcock brought horror to the mainstream in the first year of the flower power decade. He didn't use monsters, zombies or vampires; though in many ways Norman Bates was all of these things. With the cinematic release of ‘Psycho’ horror became not only mainstream but intelligent. Of course it still had the jumps and scares to make your terrified date hold you close in fear. It also had the power to keep you awake long after the salty taste had faded from your tongue that night. From the popcorn I mean. Go clean your dirty minds.

“Mama's gonna make all your nightmares come true. Mama's gonna put all her fears into you.”

Roger Waters sang that haunting warning in Pink Floyd’s ‘Mother’ from the 1970s album ‘The Wall’. I guess there was one motel owner who would have agreed with that line if he heard it drifting along the airwaves of his secure unit. Norman Bates was the epitome of sex and death. He was sex and death. This prude, virgin man burrowed deeper into our psychosis more than any overt demon of the night had done previously. Where Dracula had penetrated his nubile victims, Norman Bates went one giant step further. He killed his mother so he could become her.

He created a half Norman/half Mother creature. Both of these twisted avatars were afraid and disgusted by sex in equal measure. The creepy motel owner lusted after beautiful women and hated them. His desires repulsed both him and the mother who watched from a silhouetted window and his own fragmented mind. The only course of action was to kill them. We know from the witness testimonies of Ed Gein, the real life monster both Robert Bloch and Hitchcock used as a template for Bates, that this all rang horribly true in reality. A skilled taxidermist always needs dead things to preserve after all. And what’s taxidermy but rebirth of the lost.

To bring it back you first have to kill it.

In part two we look at Giallo, slashers and the return to puritanical horror. Don't worry, like some horrific Justin Timberlake we bring sexy back.
at February 24, 2013
Email ThisBlogThis!Share to TwitterShare to FacebookShare to Pinterest
Labels: Death, Hitchcock, Horror, Psycho, Sex, vampire, Zombie.