My reply to Mark's Blog challenge.

I've been challenged by my friend Mark West to join in the Lovely Blog Hop to talk about some of the things that have shaped my life and my writing.
At the end of this post, you’ll find links to some blogs and writers I like. The writers have all agreed to participate in and continue this Lovely Blog Hop.

It was around the time of my second birthday and I was sitting on a tricycle. One of those old heavy ones, so heavy I couldn't pedal it. The red and white rusting frame stood out against the concrete garden of the tenement square like a faded rainbow in an overcast sky. I remember being excited and happy climbing on the trike; though I have no idea if it was mine or if it belonged to one of the kids from the flats on the ground floor. Just sitting on it, unable to move its weight was a joy. I remember smiling and thinking it was the best day of my life- I have no idea if this is accurate as I can’t remember any other days before it.

Then out of the corner of my eye I see a kid approaching below the fluttering ghosts drying in the breeze from the upstairs balconies. He was older than me and scruffy like he’d just rolled off the back off the rag and bone man’s cart. I know I liked him, that he’d been a friendly face. But then he shouted at me, called me names I can’t remember and began hitting me hard in the arm. I wouldn't move though; couldn't make a quick getaway anyway and I had no intention of leaving the trike. I remember looking up at him through teary eyes and hoping he’d just wipe his nose. Looking at his sleeve I realised he had no more room.

Then I felt a smack. A flash of pain and the blue August sky became black. When I finally opened my eyes I saw a kid far too big for a trike pedalling off laughing and calling me a baby for crying. Then he rose up like he’d been summoned on his own personal Rapture. I too found my feet by invisible hands. My big brother had lifted me up, brushed me down, the bully’s mother had done the same to him, smacking his uncombed head as he flew inside the slamming door of the tenement flat. 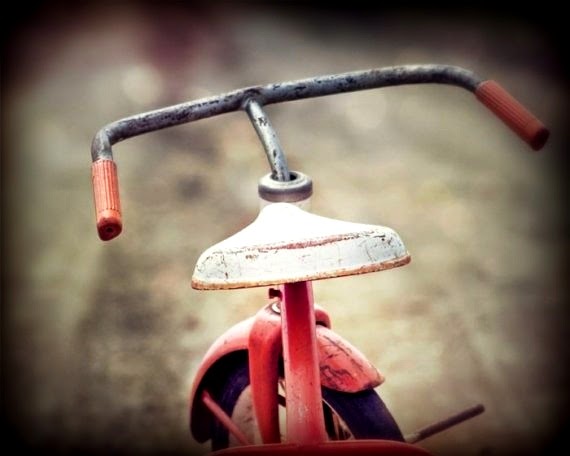 I have flashes of memory around that time. Dark stairwells up to our neighbour’s flats above. Twisting and black, smelling of horrible things. A shadow of a cowboy approaching on my bedroom wall.  An iron gate that creaked an entrance to a foreboding tenements on the hill above on us. They’re are all just glimpses, moments. Maybe I remember the trike as was that the first time I realised not all people were nice.  A year later we moved far away into our own big house with gardens of grass rather than concrete. That's a more pleasant childhood memory. Moving day, sitting inside the footwell of a big truck approaching a new world with new adventures.

I wasn't really a big reader as a child. I remember going to get my first library card with my primary school class and watching the bookshelves elongate like a pull focus when I looked at them. I was intimidated right there. I remember my school teacher shouting at me because I was the only one who hadn't selected a book. So I picked up one that had a picture of a dog called the Westminster Abbey Mystery or something like that. I spent a lot of time in London as a kid because my uncle owned a pub outside the Houses of Parliament. So I recognised the place in the title. I’d not long come back from the Abbey on a trip with my parents too.

I never read that book. I hid it under a sofa cushion when I got home like it was a dirty secret. Many months later after moving it around various hiding spots it was discovered by my mum. I confessed and cried that it was overdue. I had to take it back to school and owned up. I didn't, I hid it again and said I’d returned it. And the guilt layered up.  That put me off reading for a long time.

Then one summer I found some books in my brother’s room. He was doing a summer job working on a bin lorry. He brought home lots of treasures that my mum usually threw out. But these books were like gold from the muck. Pan Books of Horror, Fontana, and Arrow all manner of scary paperbacks with their terrifying covers struck something deep inside of me as they did him. It was as though something woke up inside of me. I’d hidden books from my mum because I never wanted to read them, yet he’d hidden them from her because he did.  I only scanned the pages as I was terrified of discovering what happened to all those poor people on the blood soaked covers, also in case my brother came in. Or even worse my mum. But I slowly found out similar stories. But it wasn't until a couple of years into high school that I really began reading novels for pleasure. The delights of To Kill a Mockingbird was like finding home for me. After that I read everything I could find. I flew through English Literature classes and read the whole list once it was given every September; always having to pretend the books were new when we came to them in class.

Since then I've loved books. I've loved words and I look back at the Mystery of Westminster Abbey under that cushion and think of the huge waste of my childhood life without books. All because libraries and books were made to feel intimidating to me at an impressionable age. Something I've tried to avoid with my own children who thankfully both love books as much as I do. Yet I still feel like I'm an outsider in libraries even though I think of them as places of sanctuary from a hectic and pixel painted world.

My daughters are everything to me. Beside my family and writing I love music. I play piano and write songs in my spare time. I played in various bands in my younger days and loved every minute of it. The gigging, the studios and being part of a gang. Now music is something that I do alone so the brotherhood aspect is no longer there but the passion for writing music is stronger. When I'm in front of a piano or a keyboard I feel at home.

I have a home studio which is my real passion. Recording music. I once had my own recording studio and started building up a good client base in the mid to late 1990s. My dream came true after so much hard work. This was everything I’d wanted since being 13. Then I started to be ill a lot of the time and being in a band and starting a company wasn't ideal with that. I quit the band hoping I could still build on my work of trying to be a producer. But just as things took off and I got investment I got really ill. After a year of tests and deteriorating health I had to close my studio. You can’t let artists down and I was doing it more and more. I went off music for years after that. Eventually I couldn't move my fingers enough to play. I gave up. I had my kids and my life. Music had hurt me. Until it healed me in some ways years later. Now it is a real passion and in its own way a healer.

I'm an accidental writer if a writer at all. I wrote my first story when I was 9 about a spacecraft that needed a special key to get home but the only other key was buried inside an Egyptian stone in the British Museum. My next was many years later after a Twilight Zone marathon. Me and my two best friends decided have a competition. We had to come up with a twist tale by the next morning. Mine was weak, my other mate‘s was terrible and the lad who suggested it had a great one.

But I caught the bug. My mum even bought me a second hand typewriter. I wrote in spurts now and again and wasted so much paper.

It wasn't until much later in my life that I found a voice in writing. I also found horror. It was right under my nose all along. You see I thought to be a writer I had to be ‘serious’. I joined an adult learning class for beginner writers. It was heavily focused on literature and that’s all I wrote for a long time. Until one day the tutor wrote a note on the bottom of one of my stories,

“Everything you write leans toward the supernatural or horror. You do it well. Go with it.”

That was all the encouragement I needed. Since then I've slowly built up a small body of published work.  But I still feel like an accidental writer that walked through the wrong door.